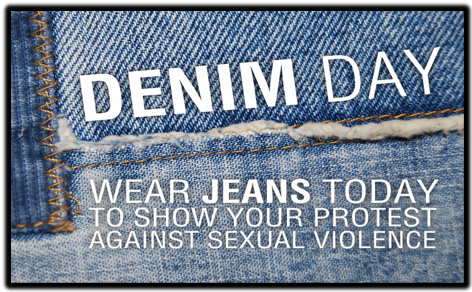 In 1992, an 18-year-old in Italy was picked up by her driving instructor to begin a driving lesson. Soon after, she was raped on the side of the road by the instructor. She pressed charges and won her case. The instructor appealed and the case went to the Italian High Court. In 1999 the court overturned the conviction with a member of the High Court declaring that since the victim wore very tight jeans, the instructor could not have removed them himself, therefore the victim must have willingly participated. Women of Italian legislature protested the decision by wearing jeans. As news of the decision spread, so did the protest. In April 1999 the state of California established the first Denim Day in the United States.

Text STOP to opt-out. Standard message & data rates may apply. For more information about the service text HELP to 20121. For end user privacy and terms & conditions go to http://www.preventionpaystext.com/policies/

Youth under the age of 12 cannot use the chat line without parental consent.

Texting with 20121 is free for the following carriers: Verizon Wireless, AT&T, T-Mobile, MetroPCS, Sprint, Cricket, Nextel, Boost, Virgin and as such, your conversation with us will not appear on your cell phone bill. For all other carriers it’s “standard rate” which is whatever you pay for messages per your wireless plan. If your plan has unlimited messaging, then it’s free to you as well. Texts are also free for pay-as-you-go or pre-paid cell phones as long as you have your prepaid service with one of the above mentioned carriers.